Let’s face it: telemarketing or cold calling is the black sheep of marketing tactics.  It’s gotten a bad rap because of outsourced BPOs scattered around India and Asia bombarding people at home at inopportune times (like right in the middle of dinner) calling about worthless products or services that no one wants or needs.

This has been made worse by the use of automated robot calls, that are so cheap to run that any response by the user provides an instant return on investment for the company behind them.

When I was a child, let’s say 8 or 9 years old, and the phone would ring during dinner, my father would order me to go and answer the phone and tell him who it was. Now, of course, this was so long ago that we didn’t have cordless phones (yes, that’s how old I am!), and caller ID didn’t exist either. So I would answer, then cover my hand over the receiver and yell to my father in the kitchen to tell him who it was on the other end of the line. When it was obvious to my father that it was a telemarketer, he would yell back to me from the kitchen saying, “Tell them I’m dead!” Of course, I never dared say this to the telemarketing agent on the phone, but the message was clear—GO AWAY, YOU ARE BOTHERING ME, we don’t want whatever it is that you have to sell.

Of course, this was in the 1980s when cold calling in the US became the go-to strategy for all types of businesses. The popular film starred by Leonardo DiCaprio, The Wolf of Wall Street, shows the ruthless tactics deployed by scammers who refined their cold calling efforts to such a degree that the fraud became believable. But the underlying reality is that telemarketing has long been equated with the scam. Not only has this continued to plague the industry, the number one challenge that anyone doing it has is establishing trust with the person on the other side of the line.

Getting past the initial suspicion is the first challenge for any cold caller. Distrustful prospects will ask: “How did you get my data?” “What is this about?” “What do you want from me?” It helps to recognize that this pushback is normal. AND there is something you can do about it.

In my college days, I started out my career as a telemarketer and had to make cold calls. I worked for a brokerage firm (not exactly on the same level as the Wolf of Wall Street, but a brokerage firm nonetheless) trying to entice prospects to attend an informational seminar about how they could “save hundreds of thousands of dollars on their mortgage.” That was the line in the script that I was taught to memorize that got me the most hang-ups. As soon as the phrase came out of my mouth, that’s when the line would go dead, and I’d have to pick the phone right back up and start all over again with someone else. Of course, my “database” at the time was just the phone book, so you can imagine, I didn’t get very far in terms of getting people to agree to attend the seminar.

At a somewhat higher level of sophistication, I worked in my college “call center” (a basement room in an administrative building) cold calling former students to get them to donate money to the school. I absolutely hated that job and I don’t think I even lasted a month. I didn’t have the skill set at that time to call people to ask them for money. It made me highly uncomfortable and I couldn’t get myself in the role I needed to in order to convince my audience of the value in them handing over their hard-earned paycheck to me. In addition, all the prospects wanted to do was ask me questions about what teachers or coaches were still at the school, reminiscing about their experience oh so many years ago when they were students, and by the end of the conversation, they would thank me for listening but not give a penny to the cause. The worst part of it for me was that the other cold callers around me were all successful. Every time they got a donation, the floor manager would ring bells and blow whistles and write the donation amount on a whiteboard for everyone to see. I felt inadequate and incapable. I couldn’t shift my perspective to see things any other way; I was absolutely convinced that I wasn’t cut out for the job, and that I wasn’t good enough to be successful at it.

For both jobs, what I didn’t have the maturity to understand at that time was that if there’s one thing you cannot do when cold calling is read a script. I should have deviated from the text I was given and made up my own. I should have researched prospects to know them better before trying to call them. Granted at the time there was no internet (yes, I told you I was old!) and social media channels didn’t exist yet either, so there were limits to what information I could have found then, but today there is no excuse. There is a plethora of information available if you just go looking for it. Researching the companies you want to do business with, understanding your ideal buyer persona, taking time to create individualized pitches, and putting yourself on par with your prospect so that they treat you as a peer, are important ways to stand out from the crowd. But even that is still only part of the equation.

Marketing buzz words today include omnichannel marketing, which really means doing a little bit of everything to get the attention of your audience. Combining social media marketing, content marketing, email outreach, social selling, and outbound telemarketing will vastly improve your chances of reaching prospects. By having persistence and consistency across these channels, you will generate a viable network of prospects that you can nurture over time. However, it is important not to leave out the phone as part of your outreach.

Many people get sick to their stomachs at the idea of having to call someone they don’t know. It puts you in a place of vulnerability and uncertainty that can create a great deal of stress if you allow it to. And at the same time, if you are able to embrace that vulnerability and use it as a way to develop courage and strength, that can be a real opportunity for personal empowerment and connection. It took me a long time to get comfortable enough with myself to be able to be successful at cold calling. It requires a great shift in mindset to be able to do it well—one that starts with self-confidence and believing that what you are doing is providing immense value to the other person. By focusing on what you are giving instead of worrying about what you are getting, will change the dynamic and energy you bring to that conversation.

Another thing that people completely overlook when cold calling is that the goal is really to enable your prospect to do all the talking. In order to get good at it, you have to shut up and learn how to be a good listener. So many telemarketers won’t shut up. From the second someone answers the phone to the point that the prospect hangs up, they don’t stop. Some of them are so stressed out at getting through their entire speech before you hang up that they have completely lost touch with why they are calling in the first place. I once had a call with a telemarketer who got so angry at me for not listening to his speech to the very end, that he called me back a second time to yell at me for hanging up on him! Talk about not seeing the forest for the trees!

One of the most successful strategies when cold calling is to be human. Having empathy for your prospect and making him/her feel heard. Think of all the ways that your offer provides value and innovate your pitch to grab your prospect’s attention in such a way that they see it is key to progressing. It can take multiple calls to several different decision-makers within a company to get the full idea of how they could benefit from your offer, how the decision-making cycle is structured, what challenges they are looking to solve, and what budget they have for such initiatives, so don’t worry if this process takes time; persistence is important so that you don’t lose momentum and can push through by using each bit of information you gather like pieces to a giant puzzle.

But none of that can happen if you don’t establish rapport from the onset, and rapport can only be built after you have found peace within yourself and you enter into the conversation with an open mind.

Are you interested in learning more about up-leveling your skill set around B2B software marketing? 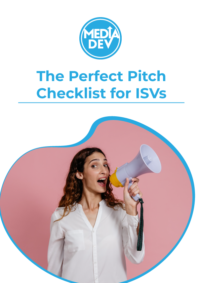